Pandemic Board Game (How to Play Guide)

In Pandemic, players are elite members of the Center for Disease Control tasked with preventing the spread of four deadly diseases. The goal of the game is to win and you and your friends win by finding the cures for those four diseases. Players begin in a research station in Atlanta. And each player starts with a hand of cards, which can be useful in traveling, developing infrastructure, or curing disease.


Cards are either city cards with the city name and color on them or event cards which will let you do a one-time special ability. There’s also a number of cities already infected with various diseases. On your turn, you will take four actions, draw more cards, and then see which cities get infected. Actions include curing, treating, sharing, building and moving.

Cure: If you’re in a research session, you may discard five cards of the same color to cure that disease. Remember, cure all four diseases, and you win.

Treat: You may remove one disease cube in the city you’re in. If you’ve already cured that disease, you may instead remove all disease cubes from the city. If the disease has been cured, and there are no more cubes of that color on the map, then Congratulations, you’ve eradicated it. No more cubes of that color will spawn for the rest of the game.

Share: You may give a card to a fellow player or take a card from her. You both have to be standing in that card city. If you or your colleague end up with more than seven cards in hand, you must discard down to seven. Build: You may build a research station in the city you’re in by discarding that cities card.

Move: You may move to an adjacent space on the map. You can also travel from one research station to another. Alternatively, you may discard a card to go to the city printed on it. If you’re already in that city, you may discard it to move to any city in the world. Each move of the pawn counts as one action. You can use an event card whenever you’d like and it doesn’t count as an action. After taking four actions, draw two cards from the player deck. If you have more than seven cards, you must discard down to seven. Sometimes when drawing player cards, you’ll run into an epidemic. Instead of going in your hands and helping you, this card causes the diseases to grow stronger. Immediately discard the epidemic, then move the infection rate counter to the right. Now draw the bottom card of the infection deck and add three cubes that city, unless that color disease has been eradicated. 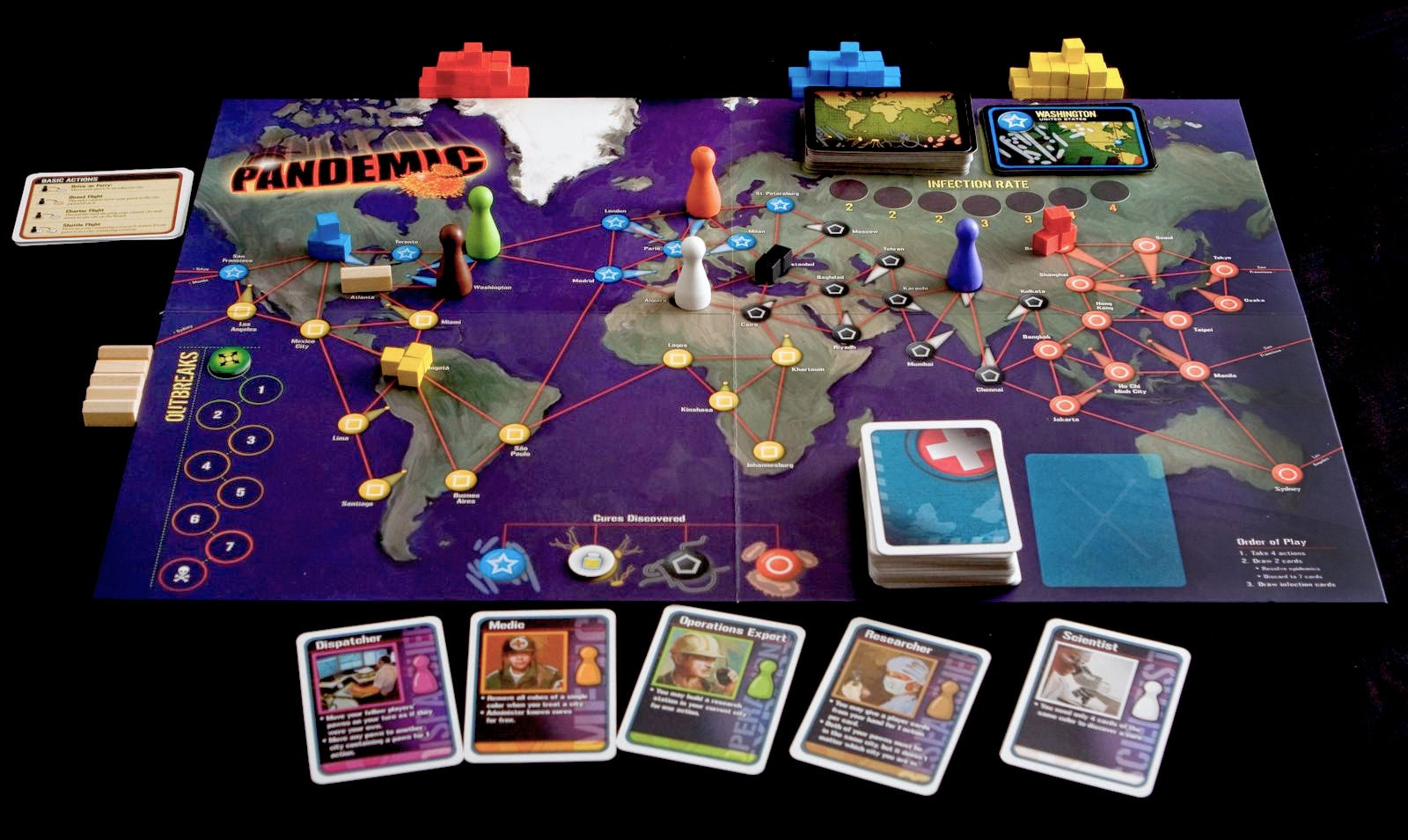 Finally, shuffle all the discarded infection cards and put them on top of the infection deck. That’s right. Every city that’s already been infected is first in line to get infected again. After drawing player cards, the infection spread. Look at the infection rate and draw that many cards from the infection deck. Place one disease cube of the appropriate color on each city drawn, unless the disease has been eradicated. If a city already has three disease cubes of one color, and you have to place a fourth, an outbreak occurs instead. Raise the outbreak track by one, then place one disease cube of that diseases color in every adjacent city. If there’s already three cubes of that color in one of those adjacent cities, another chain reaction outbreak occurs. But don’t worry, chain reaction outbreaks don’t cause an infinite loop of outbreaks. Each city can only outbreak once per infection card drawn. Your turn is now over. The next player may take their turn. If players cure all four diseases they’ve won. Players lose if eight or more outbreaks have occurred. If you run out of disease cubes and need to place more or, if you run out of player cards and need to draw more, things might seem grim, but luckily each character has a special role to make the game a bit easier. For example, the scientist can find cures with one less card, the researcher can easily give cards to other players, and the medic can treat diseases faster.

Each player picks a role, places their research station and their pawn on Atlanta, and draw starting player cards. Shuffle the infection deck and draw nine infection cards. The first three cities get three cubes each, the next three get two, and the final three, get one. Place all nine cards in the infection discard pile. Now prepare the player deck.

To play on the tutorial mode, divide the player cards into four piles. Shuffle one of the demo cards into each pile, then place the piles one on top of another. Do not shuffle the cards at this point. Now look at the cards in your hand. The player with the highest city population goes first.